Developed with the counsel and recommendation of an international advisory committee, SNAP is pleased to announce the formation of its not-for-profit [501(c) (3)] imprint. The imprint’s mission is to create a range of printed objects and digital representations to accompany and memorialize cultural events that have not received the attention and recognition they deserve. Following is a list of advisory committee members as of March 2013.

Nathalie Anglès is founder and Executive Director of Residency Unlimited [RU], a New York-based not-for-profit arts organization founded in 2009 that fosters customized residencies for artists and curators through strategic partnerships with collaborating institutions. A graduate in 1993 of the École du Magasin independent curatorial training program [Le Magasin – CNAC Grenoble], Anglès has worked for Sotheby's London, where she organized the mid-season sales for Impressionist and Modern art; the American Center in Paris, as Director of the Residency Program for American artists; the École des Beaux Arts [ENSBA] as curatorial assistant to Alfred Pacquement; and the Union Centrale des Arts Décoratifs [UCAD], under the leadership of Marie-Claude Beaud, where she organized a wide range of contemporary art projects. From 2000-2008, Anglès worked as Director of Location One's International Residency Program in New York, where she organized multiple exhibitions of emerging and mid-career artists. In 2008, the French government bestowed Anglès with the title of Chevalier of the Order of Arts and Letters.

Scholar, writer, and curator Sarah Lewis is currently finishing her book, Rise, under contract with Simon & Schuster [U.S., 2013 release], HarperCollins [U.K.] and in over six countries to date. Drawing on her work in the arts and expanding into sports, business, psychology, sociology, and science, Rise explores the advantage of resilience and so-called failure in successful creative human endeavors. Her Yale University dissertation on Frederick Douglass, the Circassian Beauties and American Racial Formation is now under contract with Harvard University Press [2014]. Selected for Oprah's Winfrey's 2010 “Power List,” and included as a member of President Obama's Arts Policy Committee, her writing has been published widely. She has also held curatorial positions at The Museum of Modern Art, New York, and was the co-curator of the acclaimed 2010 SITE Santa Fe Biennial, NM. She received her B.A. from Harvard University, an M.Phil from Oxford University, and her PhD from Yale University.

David Ebony, a longtime Art in America staff member, is currently a Contributing Editor of the magazine. He has written for the magazine numerous features, reviews, and news items on a wide range of subject matter and artists, including Per Kirkeby, Piero Gilardi, Antoni Tàpies, and Katharina Grosse. Ebony has most recently become a columnist for the website Yale ARTbooks, Yale University Press. He has also written a number of exclusive articles for the A.i.A. website as well as Artnet.com. Ebony also contributes to Lacanian Ink, a journal of psychoanalysis and art. He is the author of monographs on a number of artists, including Emily Mason [Braziller, 2006]; Botero: Abu Ghraib [Prestel, 2006]; Craigie Horsfield: Relation [Jeu de Paume, 2006]; and Carlo Maria Mariani [Edition Volker Huber, 2002]. Formerly a musician and songwriter, Ebony has had one of his 1983 compositions, “Gun Shaft City,” recently recorded by Bryan Ferry of Roxy Music fame, to be released in 2014.

Walter Robinson is a painter and an art critic who was founding Editor of Artnet Magazine [1996-2012], and who also served as Art Editor of the East Village Eye [1983-85] and as a contributor to Art in America [1980-1996]. From 1973-77, he co-published and co-edited Art-Rite Magazine, and he is the author of the book Instant Art History [Ballantine, 1995]. Robinson has exhibited his work at Metro Pictures, Haunch of Venison, both in New York City, as well as other galleries. His most recent exhibitions include Hello from New York at Firecat Projects in Chicago [December 2012] and Indulgences at Dorian Grey Gallery in the East Village of New York City [March 2013].

George G. King's career has been exclusively in the art museum field. After spending six years at the Cooper-Hewitt, National Design Museum in New York, he became the first professional Director at the Katonah Museum of Art in Westchester County, north of New York City. During this period he oversaw the construction of a new museum facility by Edward Larrabee Barnes, organized and curated over sixty exhibitions, some of which traveled nationally. He then became Director at the newly opened Georgia O'Keeffe Museum in Santa Fe, NM, where he oversaw the museum's international exhibition program, built the only research center in the country dedicated to American Modernism, and more than quadrupled the museum's permanent collection. He has served on many not-for-profit boards, including the Association of Art Museum Directors, the Clyfford Still Museum, in Denver, and currently the East Side Settlement House in the Bronx.

A performance by renowned poet, musician, actor and visual artist, Saul Williams was Presented by Hunter East Harlem Gallery in the historic Church of St. Edward the Martyr in East Harlem. Sponsored by SNAP Editions

The performance, titled Unanimous Goldmine, was based on an ongoing project revolving around a fictional story of a young hacker from the coltan mines of Central Africa. Williams is best known for his blend of poetry and alternative hip hop and for his lead roles in the 1998 independent film SLAM and the 2013 jukebox musical Holler if Ya Hear Me, featuring Tupac Shakur's music on Broadway. 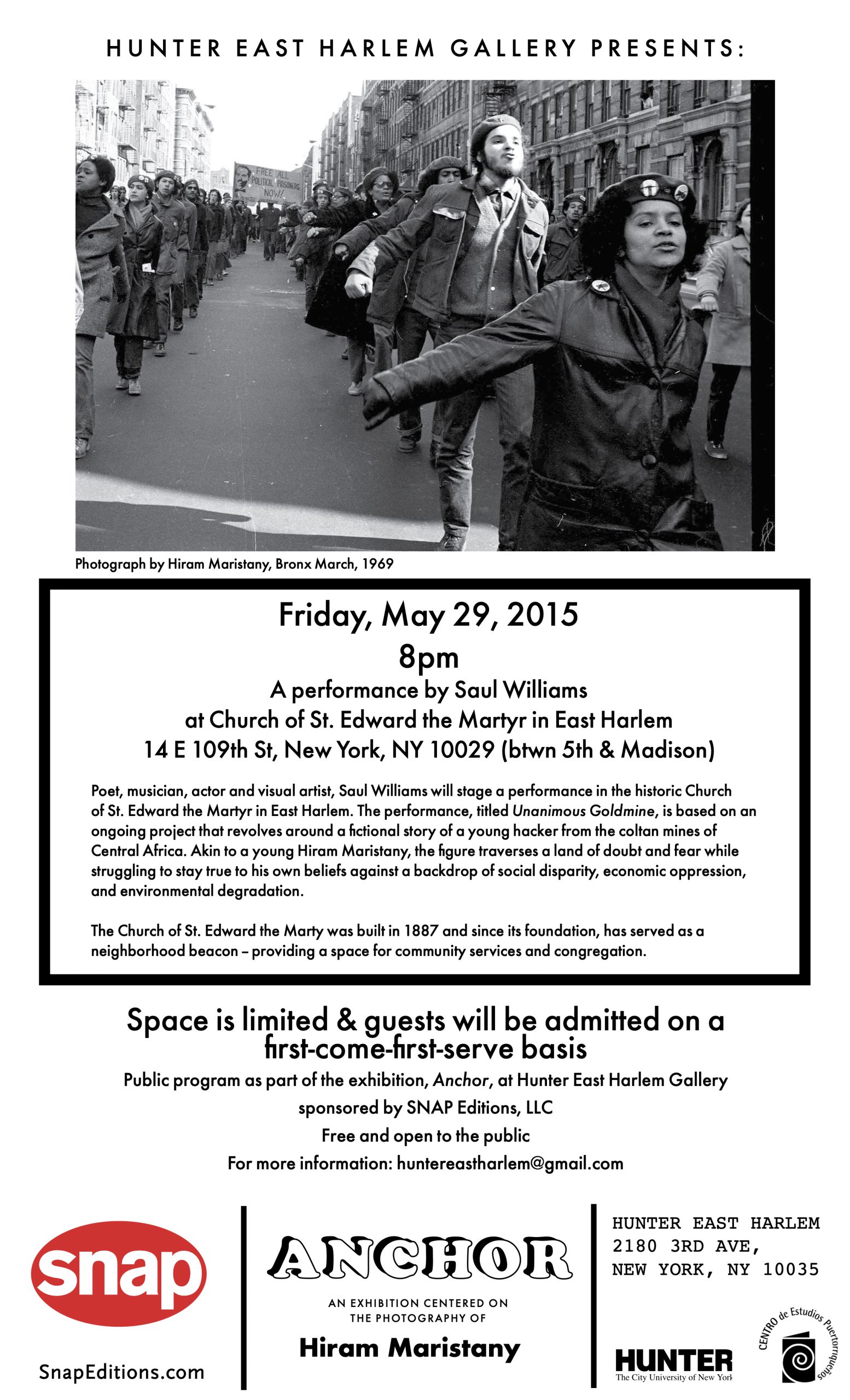